Everyone knows that Coachella is one of the most popular music festivals in the world, but it’s important to remember that the official title is “Coachella Music & Art Festival“. The art that is created for the festival is really some of the most spectacular and important aspects of the gathering, serving as an instant visual experience for fans as they arrive to partake in the good vibes from the location. The art is generally very physical, very thought provoking, and very large. Many installation pieces serve not only to wow the mind and eyes, but provide life-changing shade in the California valley, as friends make new friends while hanging out under the structures.

This year’s Coachella art budget dwarfs all earlier years, demonstrating the importance of visual arts to music, and some of the structures built are absolutely incredible works of art and craftsmanship. For months – and years in some cases – artists and skilled work crews have labored to create wild (and safe) pieces that will be transported and erected on the grounds for the 60,000+ attendees of the festival. Check out an in-depth breakdown of all the art pieces here by Alex Groves. We especially love the Hippos In The Office performance installation – so awesome!

“Actors dressed up as suited hippos banged on desks, threw papers around and pretended to drink gasoline among other things inside of this art display, a three-story building with clear plate glass windows topped by a fiberglass helicopter. Inside, the hippos acted wildly in an office-like environment.” — Alex Groves 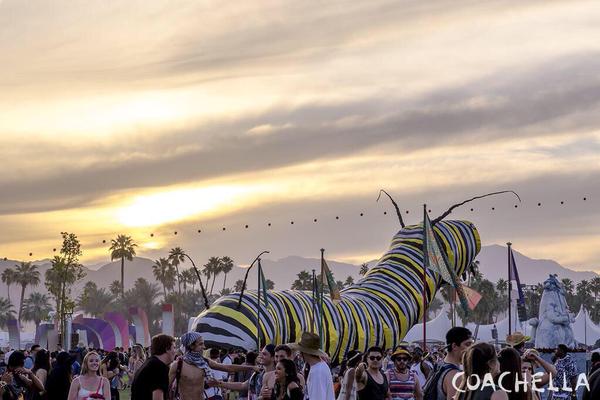 One of the central figures in the first weekend was the giant caterpillar that greeted fans as they arrived. The work was designed and built by the team Poetic Kinetics, who returned again after being involved in the festival for many years. During the first 2 days “Caterpillar’s Longing” was a focus spot to tell friends your location, and at night the lighting effects were mesmerizing. According to the team, it is intended to bring public awareness to the endangered monarch butterflies and encouraging attendees to plant their own milkweed and nectar plant gardens, as well as generally advocate for monarch and pollination conservation.

“Every year 1.5 million acres of monarch habitat are destroyed. An area equal to the size of the Coachella Polo Field x 7,500,” according to Poetic Kinetics.

But the real treat was the surprise evolution on the last day of the weekend – the caterpillar was literally transformed into a stunning and colorful butterfly, complete with amazing details in it’s coating that gave it an interactive spin that could be petted and played with.  Attendees were recruited to help move the structure around the grounds over the course of the day, to interact with crowds and live up to the “kinetic” namesake of it’s creators. Check out the amazing reaction and photos on Twitter at #coachellacaterpillar. 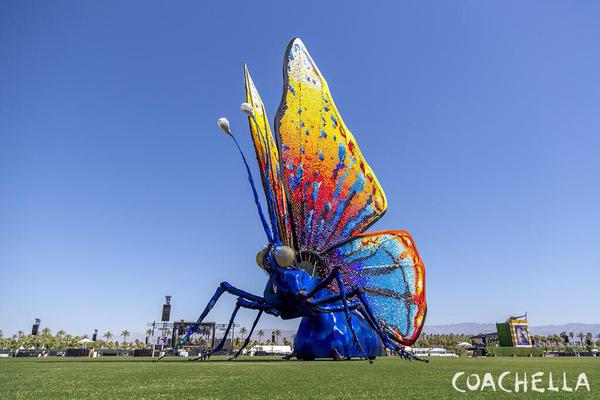 More on the art can be found in this article on The Press Enterprise site.

Jeff Askew - Jeff Askew is part of the Freshtone founding team and brings decades of creative technology experience to the mission. A veteran of early digital agencies, Jeff started working for NASA's software center in the early 90's while spending his nights playing Athens clubs with his alt-rock band. For his diversions at home, Jeff spends time pushing guitar and Minecraft on his kids and keeping up with science news and economics.
Next

"The Wrecking Crew" feature-length film spotlights some of the great studio session players from the 60's.